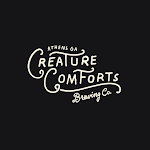 IN THE ILIAD, THE HOMERIC HYMNS, AND IN HESIOD'S THEOGONY, ATHENA IS GIVEN THE CURIOUS EPITHET TRITOGENEIA. THE MEANING OF THIS TERM IS UNCLEAR; IT COULD MEAN VARIOUS THINGS, INCLUDING "TRITON-BORN", PERHAPS INDICATING THAT THE SEA-DEITY WAS HER PARENT ACCORDING TO SOME EARLY MYTHS. IN OVID'S METAMORPHOSES ATHENA IS OCCASIONALLY REFERRED TO AS "TRITONIA".

With a touch of coriander and sea salt, you can say this beer was Triton-born. We made a Gose and we're calling it Tritonia. This limited release offering was made with Cucumber and Lime and is available in kegs and serving at your favorite craft beer bars now.

Heads up! Creature Comforts Tritonia may not be available near you. Follow this beer to get notified when it's available nearby, try searching in a different area, or discover some similar beer.