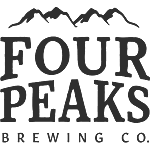 When we asked the brewers at Four Peaks to name the perfect beer style to drink with a burger, we had no idea the rift such a question would cause. Half of the brewers claimed that IPA, with its bold hop character and bitterness that could cut through rich beef, was the supreme burger-pairing beer. The other half insisted that brown ale, with its roasty malt flavors that mimic both the grilled char of the beef and the breadiness of a lightly toasted bun, was the only correct choice. We believed both sides (and we didn’t want to cause a minor civil war at the brewery), so for our second Cold Beer & Cheeseburgers/Four Peaks collaboration, we split the difference.

The CBCB IPA is a hybrid “brown IPA,” meaning it has qualities of both classic English-style brown ales and American IPAs. Dark malts lend flavors of toasted nuts, caramel and bread crust with hints of coffee and chocolate, while eight different hops—including classic American varieties like Bravo, Liberty and Glacier—give the beer kicks of citrus, herbs and tree bark. The unique interplay of these flavors makes for a beer that both factions of the Four Peaks brewers agree is the ultimate burger beer.

Heads up! Four Peaks CBCB IPA may not be available near you. Follow this beer to get notified when it's available nearby, try searching in a different area, or discover some similar beer.