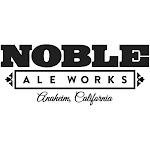 Nelson Sauvin, a hop varietal grown out of New Zealand, is the featured hop in this single-hop Double IPA. Our second release in our Double IPA series that showcases our favorite hop varieties, one by one, with each consecutive release. This hop is a mind bender with flavors of Sauvignon Blanc, gooseberries, truffle and allspice. Look forward to many upcoming releases within this series of single-hop Double IPA’s.

Heads up! Noble Ale Works Nelson Showers may not be available near you. Follow this beer to get notified when it's available nearby, try searching in a different area, or discover some similar beer.

A trophy beer that’s a testament to our homebrew roots.

Hop flavors dominate the taste, but are balanced by just enough malt to keep things reasonably in balance.