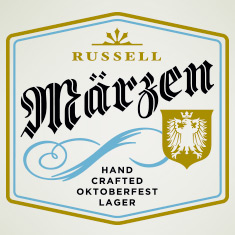 Märzen, which means "March" in German, is a classic German beer style created before the invention of refrigeration. Back then, brewers weren't able to brew lagers during the summer months the temperatures were too high for the lager yeast to ferment properly. So in March, brewers would stockpile beer which was cellared in cold, dark caves during the summer. In October, when temperatures had cooled, and it was time to brew again the remaining beer was pulled from the caves and enjoyed by the towns people in a celebration we now call Oktoberfest.

Heads up! Russell Marzen may not be available near you. Follow this beer to get notified when it's available nearby, try searching in a different area, or discover some similar beer.