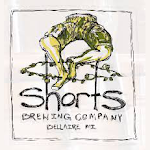 Soft Parade is a gourmet specialty pour that is brewed with toasted rye flakes and two-row malted barley. Loaded with pureed strawberries, blueberries, raspberries and blackberries, we refer to this fermented potion as a fruit infused rye ale. The result is a refreshing fruit delicacy that is easy to drink, visually appealing, and finishes dry.

Soft Parade was originally developed because Joe Short wanted to create a beer that incorporated a medley of berries, had a great color, and appealed to wine drinkers. The name Soft Parade stemmed from two moments in Joe Short’s life. First, because Joe worked as a brewer at the Traverse Brewing Company and The Doors album, The Soft Parade, played every day at the end of the brew shift. The second moment occurred when Joe was driving by himself, flipping through CD’s in his car, and came across The Soft Parade album again. At the time, The Soft Parade beer had not been named and it dawned on Joe that the medley of fruit infusing into the golden beer reminded him of a soft parade. That day the beer was named!

Heads up! Short's Soft Parade may not be available near you. Follow this beer to get notified when it's available nearby, try searching in a different area, or discover some similar beer.