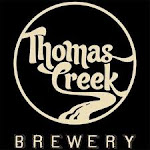 A fairly strong, highly roasted dark stout with pronouncOne of a kind, is the story behind the Breweries first ever release of Tom's Nitro Series. Tom wanted to create nitro craft beers that were NOT copies of our year round, seasonal, or occasional beers. That lead us to introducing this nitro first. This delectable cherry stout starts with an aroma that will make you think about cherry pie. It is sour and sweet all in one. It's like sipping on a cherry bomb. You will beg for another. What's in a name? Okusamaththunduluka is not from your yearly eye doctors chart. It is actually the Zulu word for cherry. ed bitterness.

Heads up! Thomas Creek Okusamathunduluka Sour Cherry Stout Nitro may not be available near you. Follow this beer to get notified when it's available nearby, try searching in a different area, or discover some similar beer.