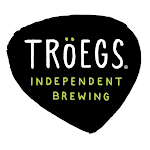 Scratch #29-2010 is a true brewery collaboration with cast of characters involved in recipe formulation, barrel-aging, dry-hopping, bottle-conditioning and finally, taste-testing. Scratch #29 started off innocently enough as a Pale Ale fermented with Westmalle yeast. After fermentation, the beer was aged for twelve days in virgin Pennsylvania Oak barrels supplied by Keystone Coopers. And then the fun began. Even after brief wood-aging the oak?s intensity overwhelmed the Bravo and German Northern Brewer hops used in the boil. But have no fear, a two-week dry-hop with Willamette and Hersbrucker hops dulled the oak and transformed this beer. Bottled-conditioned for three weeks before release, Scratch #29 imparts an intense spicy flavor with grassy notes from the Hersbrucker hops. Hints of orange and a slight alcohol burn come through with the high carbonation leaving pins on your tongue in the finish.

Heads up! Troegs Scratch Beer #29 Belgian Style IPA may not be available near you. Follow this beer to get notified when it's available nearby, try searching in a different area, or discover some similar beer.